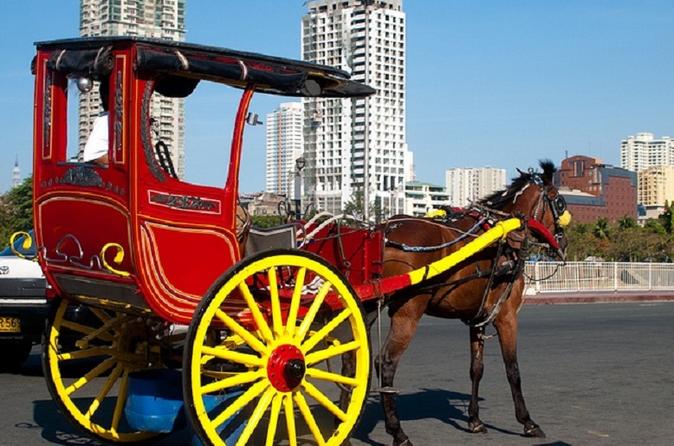 Manila’s city tour starts with a visit to Rizal Park, named in honor of the country’s national hero, Dr. Jose Rizal. After a brief picture stop, proceed to the Walled City of Intramuros to visit the remnants of Spain’s conquistadores.  Stop at Fort Santiago, an old Spanish fortress located at the mouth of Pasig River, where great moments in Philippine history occurred.

Travel through the cobbled streets to San Agustin Church, the country’s oldest stone church, and view its wide collection of ecclesiastical icons, vestments and other religious articles.   Cross the street to Casa Manila, a reproduction of a 19th century house equipped with oriental and European décor, as well as Philippine antique furniture.   Then board a horse drawn carriage called ‘calesa’ and trot off to Chinatown in Binondo, crossing the Pasig River, and onto an alley that leads you to Binondo Church another historical landmark built by the Spaniards in 1596.  Alight at the church’s entrance for a brief stop, and walk towards Ongpin, a street visible by its Chinese-style arches at its entrance.

This narrow street leads to a network of alleys and side streets crammed with small shops, Chinese drugstores, restaurants and residential houses.  Binondo’s commercial activity ranges from banks to retail and wholesale shops selling a variety of items, from Chinese curios and delicacies to textiles, jewelries and construction materials. A leisurely walk brings you to numerous gold jewelry shops at the other end of Ongpin, whereupon sits an old Spanish fountain near the entrance to Sta. Cruz Church. Stop briefly at Sta. Cruz Church which was built in 1608 by the Jesuit priests, then move on to Escolta, located a few blocks away. Steep in history, it was once used as a convoy route by the British Navy from 1762 to 1764, and the shopping center of the elite during the Spanish and American regimes.  Today, what is left of what was once known as the “Queen of Streets’ are two notable pre-World War II buildings, the Regina Building and the Perez-Samanillo Building.  The former is of neo-Classical architecture while the latter, is of Philippine art deco architecture that was designed by Andres Luna de San Pedro, son of Juan Luna, who was the country’s greatest painter and creator of the ‘Spolarium’. Spend some time exploring the area before returning to your hotel.